Living on the Reservation

Reservations
Tribes that now live on the Northern Plains originally spanned an area from the Great Lakes in the north, to western Montana, and as far south and east as the lower Mississippi. These tribes hunted, fished and farmed. Beginning in the 1700s, many of these tribes acquired horses. This new mobility allowed them to become nomadic, and several tribes began following the buffalo herds of the Northern Plains.

Increasing encounters with white explorers, miners and settlers in the early 1800s introduced alcohol and disease to the Native people. A series of smallpox epidemics during this time dealt a heavy blow to many tribes nearly wiping out entire tribes. With dramatically fewer numbers, these tribes were more susceptible to pressure from the white settlers heading west during the Gold Rush of 1849. Mounting friction between the Indian people and expansionist, white settlers pushed the Native Americans out of their traditional lands and led to the first Treaty of Fort Laramie in 1851.

This agreement did not relieve the pressure the Indians felt from the steady influx of white settlers and another Treaty of Fort Laramie was signed in 1868. This second treaty, part of the United States government’s policy of removing the Indians from their traditional lands, forced the Indians to cede large tracts of their lands to the U.S. and assigned all Native Americans to reservations. Removed from their traditional extended family structure and nomadic hunting ways, the Indian people were made to rely on the government for their basic needs. Sadly, these needs — shelter, food, healthcare, and employment — have never been adequately met. 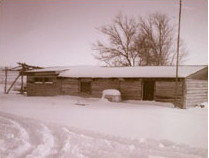 About 40% of our country’s 4.9 million Native Americans live on reservations (2008, Office of Minority Health). Living conditions on the reservations have been cited as “comparable to Third World.” (May 5, 2004, Gallup Independent). It is impossible to succinctly describe the many factors that have contributed to the challenges that Native America faces today, but the following facts about the most pressing issues of economics, health, and housing give a hint of what life is like for many of these first Americans.

Often, heads of household are forced to leave the reservation to seek work, and grandparents take on the job of raising their grandchildren. In order to survive, extended families pool their meager resources as a way to meet basic needs. The relative poverty still experienced by these blended families is best described as the gap between the overall need and the need that goes unmet.

There is a housing crisis in Indian country. Despite the Indian Housing Authority’s (IHA’s) recent efforts, the need for adequate housing on reservations remains acute. The legislature deplored the fact that there are 90,000 homeless or under-housed Indian families, that 30% of Indian housing is overcrowded, and less than 50% of it is connected to a public sewer” (March 10, 2004, Indian Country Today)

In addition, many American Indians are living in substandard housing. About 40% of on-reservation housing is considered inadequate (2003, Native American Indian Housing Council). The waiting list for tribal housing is long and overcrowding is inevitable. Most families will not turn away family members or anyone who needs a place to stay. It is not uncommon for 3 to 4 generations to live in a two-bedroom home.

Further diminishing the quality of reservation housing is the noticeable absence of utilities. While most Americans take running water, telephones, and electricity for granted, many reservation families live without these luxuries. This increases the potential for health risk, especially in the more isolated areas.